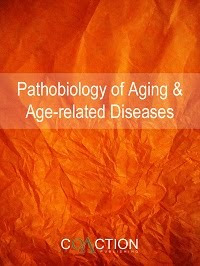 Pathobiology of Aging & Age-related Diseases (PBA) now open for submissions! This announce was posted on May 31 this year and the open-access journal launched few days ago. In the inaugural editorial titled Pathology of aging: an old problem gets a new look, Warren Ladiges editor-in-chief of PBA tells the next about the goals and scope of this new aging-related journal:

"The pursuit of investigations into the science of aging is really designed to understand why cellular processes begin to fail with advancing age, and what molecular events contribute to this failure. In this regard, the distinction between aging and the diseases associated with aging becomes less clear, and they are most likely driven by the same or similar events related to biological decline. With the launch of Pathobiology of Aging & Age-related Diseases, we hope to enlighten the scientific community by recognizing outstanding pathobiology-based scientific contributions, allowing scientists to communicate data that might be of less interest in other journals more focused on generic aging or specific scientific disciplines. Aging is indeed an ‘old’ problem and is being studied in a variety of ways that use mammalian model systems to identify mechanistic pathways that can be targeted to maintain healthy living. In this regard, we are providing a ‘new’ venue for disseminating information that specifically focuses on the pathobiological aspects of aging and the chronic diseases directly associated with aging. There will be a commitment to publishing manuscripts that meet the highest standards of science, but the nature of the journal will allow highly detailed and image-intensive descriptions of the pathology of aging and disease conditions associated with aging. The aim is to provide an interdisciplinary venue for pathology-based manuscripts that focus on the physiological function of aging in preclinical mammalian models."

The editorial board of PBA includes distinguished professors from research institutes and universities of USA, China, Australia, Spain and The Netherlands and the first volume launches with the next six articles:

You can translate this blog into any other language here. / Puedes traducir este blog a cualquier otro idioma aqui

Journal of the American Geriatrics Society

Mechanisms of Ageing and Development